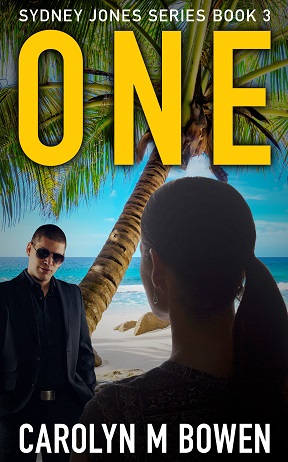 One- The Sydney Jones Series Book 3

Sydney’s daredevil attitude for taking on legal cases most would run from catches her in a snare. Will she use common sense and leave the past behind or is it too late?

Walker the father of her son is dead. She decides a summer vacation with her son in Barbados was warranted. Enemies from her past were already scouting out the island for their next move.

Godwin appears in Sydney’s life after booking a charter for her son’s first deep-sea fishing trip. His strong, yet gentle spirit was contagious. She realized his pragmatic attitude would benefit her son and encouraged their fishing expeditions.

Time passes and reality sets back in upon returning to Atlanta. A near-fatal bomb blast ends her life as Sydney Jones. After a lengthy hospitalization Director, Thomason takes over her recovery and escorts her to the family estate in Tuscany.

In time, Sydney will reunite with her son in Barbados where he’s been taken care of by Daniela since the memorial service orchestrated by Director Thomason to protect her new identity. Meanwhile, Godwin acting as guardian for the family identifies the employer behind Sydney’s “murder” and is now targeting her son.

This prompts him to travel to Beijing to end the imminent threat. He plans to get in – and out with a single assassination but hears

whispers of a deadly virus running rampant through China. His suspicions were confirmed when a US Senator, a personal client, confided a deadly virus of pandemic proportions was rapidly spreading. Godwin confirmed the news to the Barbados ministry. There were no options for protecting David, except the truth which could be as catastrophic as the world news.

Any cookies that may not be particularly necessary for the website to function and is used specifically to collect user personal data via analytics, ads, other embedded contents are termed as non-necessary cookies. It is mandatory to procure user consent prior to running these cookies on your website.